Joel Sked looks at what is in store for the Jam Tarts following their return to the Premiership and with expectation high in Gorgie. 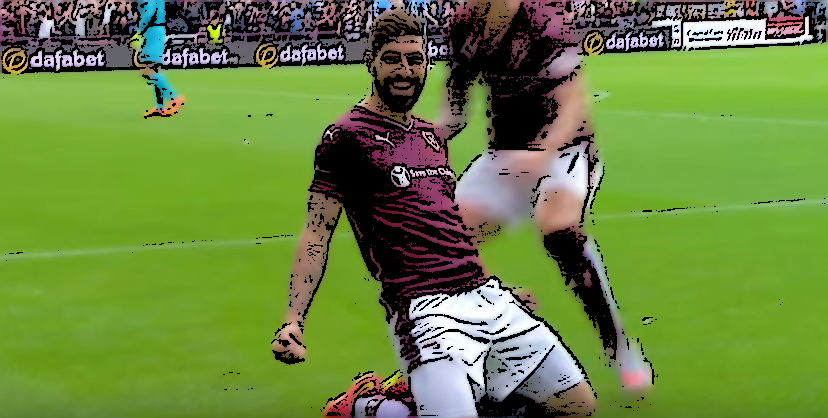 Football was reborn in EH11 last season. Goals, scintillating football, expansive attacking play, goals, diligent defending, more goals, an immaculately dressed handsome manager – the slayer of Basel – and a concoction of exotic foreigners and home-grown youngsters. Teams were swept aside with consummate ease. There was simply no answer to the Heart of Midlothian juggernaut.

‘Shut yer puss, ye slavering Hearts bastard. Away and steal from charities again (allegedly), ye were playing in the Championship.’

Indeed it is true, the Championship part (and slavering bastard). The football equivalent of a Johann Cruyff and Arrigo Sacchi love-child took place in Scotland’s second tier. Against Cowdenbeath. Four times. Yet, the 12 months in Scottish football hinterland, a place where a club of the stature of the great Heart of Midlothian should not be, was the perfect tonic for the club. Okay, let’s get serious, but the last point stands true. Last season was a blessing as the club was able to rejuvenate itself after the manic years under the stewardship of Vladimir Romanov.

The fans flocked to Tynecastle with enthusiasm rather than it simply being a chore. They were treated to a team who had a clear strategy with and without the ball. There was a purpose to the attacking play which had been missing in recent seasons and a confidence in possession with structured build-up from defence through midfield and into attack.

The club signed well and with an eye on the premiership as well. Players came in with experience to add to the energy and raw talent already at the club. Players like Kevin McHattie, Jamie Walker, Sam Nicholson and Callum Paterson were given plenty of game time to build their confidence following a trying relegation season the previous year.

Opening with defeats of Rangers and Hibernian quickly put the Gorgie outfit out in front, into a position they would not relinquish as unbeaten league runs of 21 and nine games were put together throughout the season, leading to a record points haul of 91 and a winning margin of 21 points. The pinnacle of performances came at home to Falkirk, with comparisons drawn to George Burley’s Hearts side in the way they eviscerated their opponents with a first half blitz.

As the season entered winter and injuries were picked up performance level dropped but their was an efficiency and consistency about the side which kept the Jam Tarts easily ahead of Hibernian and Rangers, neither looked like catching Hearts once the season emerged from winter.

Particular highlights included Osman Sow’s last minute-winner at Ibrox, Jamie Walker’s and Sam Nicholson’s strikes against Hibs, Alim Ozturk’s thunderbolt at Easter Road, the partnership of Morgaro Gomis and Prince Buaben before the arrival of Miguel Pallardo, the excitement of Walker as he took on a more central role and a 10-0 thumping of Cowdenbeath.

Last summer saw an extensive recruitment drive following two years of self-enforced and SFA-enforced inactivity. The signing policy by the club was a key facet of the club winning promotion. With the exception of Lee Hollis – sorry Lee – every player recruited had a positive impact at some point in the season. This summer has brought about a refining of the squad rather than an overhaul for the return to Premiership.

Robbie Neilson was honest with players such as Dale Carrick, Brad McKay, Jason Holt and Scott Robinson, they could stay but they wouldn’t play often. The biggest loss was Danny Wilson who took the surprising decision to go back to Ibrox for another season, at least, in the second tier. Two who surprisingly exited were James Keatings and Adam Eckersely, both performing admirably in the Championship while endearing themselves to the Gorgie faithful. Neilson was clearly of the view that he could improve on his options while creating a tighter and more streamlined squad for the Premiership.

The key positions to fill were centre back, left-back and two options in attack, one of which offered a physical presence following the end of Genero Zeefuik’s loan. Gavin Reilly is seen as the upgrade on Keatings to offer energy and variety in the attacking positions after thriving at Queen of the South. He is joined in attack by Juanma. An unknown quantity who had interest from the English Championship, he was pursued vigorously by Neilson and Craig Levein to fill the role of goal scorer, facilitator and nimble battering ram – he is Spanish after all.

Another player who has been patiently recruited is Nigerian international Juwon Oshaniwa. At 24-year-old and with a promising reputation he is the exact type of player the club are looking to sign and is seen as first choice after the club untangled itself of red tape. Neilson has talked positively about what the Nigerian can bring to the club.

Unknown quantities in Blazej Augustyn and Igor Rossi Branco have been signed to replace Wilson and provide competition, the worry is that it will push the talented Jordan McGhee further down the pecking order.

The successful Championship campaign was Robbie Neilson’s first as manager and he could deservedly be awarded an A. The former Heart of Midlothian stalwart brought a freshness to the club following weary seasons under the stewardship of personality vacuum John McGlynn* and the tactically deficient Gary Locke.

Neilson embraced modern methods, encouraging a professional approach from top down with triple sessions forging a high level of fitness which pushed the side even further ahead of less-talented opponents. The season was punctuated with fast starts and strong finishes. For that Neilson has to take credit.

He also deserves praise for giving the side a real purpose in attack. An understanding with Osman Sow and those who played around him saw opposition defences dragged right, left and centre. It was refreshing for Hearts fan to see their players have an intelligent idea of how to break down deep and compact defences.

Neilson developed a level of game management which saw him change personnel and formation depending on pitch condition, the weather or opposition and how they set up. It proved fruitful especially during winter when the performances dipped but results stayed consistent.

The biggest criticism of Neilson was the club’s displays in the matches versus Hibernian and Rangers. Hearts fans steeped in realism – a minority – will be using these games as a significant bearing on how he will fare up against better managers and better teams. There is areas for large improvement as their should be for a manager of his age. Last season he made a number of poor tactical and/or personnel decisions in these games which affected performance. At times it felt like he was treating those games as run-of-the-mill leagues games, the side lacking urgency when it mattered.

Like the club itself, the Championship was useful in providing a platform for Neilson to develop experience and formulate and refine his ideas and philosophies but further progress will need to be made.

*Copyright HARDEST WORKING PERSON IN FOOTBALL. AND THE WORLD.

The club’s backline has a new, more physical, look this season with three defenders signed. Paterson will carry on at right-back and there should be a new-look left-side of the defence. But most importantly in the middle Alim Ozturk is still there and at the age of 22 taken over as captain from Danny Wilson.

First impressions suggested that Ozturk was taking on Marius Zaliukas’s bombscare mantle. But fortunately for the Gorgie club it was swiftly jettisoned as he put in a number of competent performances, easing his way through the division. It was when Danny Wilson first encountered injury problems that the fans soon witnessed the best of Ozturk with an excellent defensive display at Easter Road before his outrageous equaliser.

He continued to grow in stature with a number of mature displays with few struggles. His confidence on the ball, free-kick taking and long range shots endeared him to the home crowd but it also overshadowed the more defensive qualities he possesses. He is solid in the air, has a decent recovery pace and has immaculate timing when going into tackle, reminiscent of a certain Takis Fyssas.

He will now face more talented attackers such as Brian Graham, Christian Nade and John Sut . . . wait a minute. Adam Rooney, Nadir Ciftci, Greg Stewart, Leigh Griffiths. That’s more like it. The side as a whole will come under more pressure and will unlikely see as much of the ball as they did in the Championship. That means Ozturk will face an increased workload. If the step up proves as straightforward as his performances suggest it will then the newly appointed captain will have a significant bearing on how high the club finish with his own level and those he is leading.

The third biggest budget combined with a talented existing squad and a management set-up that knows both how to recruit players and get the best out of them will ensure a very successful return to the top flight for the Tynecastle club.